The Ucheldre Centre have just sent me the leaflet with details of Ben's Dreame fortnight - an Elizabethan-style adaptation of A Midsummer Night's Dream - involving actors, puppeteers, choreographers, and other contacts of Ben from around the world, all gathering in Holyhead for open rehearsals (30 July - 2 Aug), two free performances (3-4 Aug), and follow-up workshops on dance, movement, and Shakespeare (6-8 Aug) and puppetry making and working (9-10 Aug). 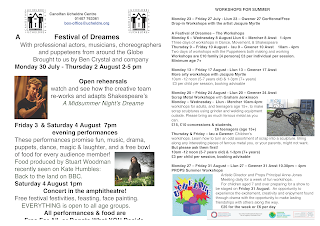 The better the day, the better the deed, as Shakespeare didn't say. But for everything he did say Ben amd I are thrilled to announce that we've reached the end of a 6-month development phase and can launch the 3.0 version of Shakespeare's Words.

We’ve received many suggestions for new features over the past decade, and all are now implemented in the new edition of the site. These include:

The site now runs up to ten times faster than before.
All texts are shown in a First Folio or Quarto edition alongside the modern text.
All Folio & Quarto spellings of words are now in the Glossary.
The Circles showing the relationships between characters are now interactive: click on a name to see that character's part in the play.
We've rebuilt the search engine, and added auto-completion functionality for word-search and character-search - start typing a word…
You can now search for words used by individual characters and in individual plays or poems.
With rebuilt advanced search function, it’s easy to see if a particular word is being used nearby your search word.
And most importantly, the site is now mobile-adaptive, so people can explore it on their cell-phone or tablet. Shakespeare’s Words is now pocket-sized!

In order to meet the substantial costs incurred in developing this new site we've introduced a ticketing model: after a limited free exploration, those who wish to carry on using the site can purchase access for a day, a month, a year, or a decade. As before, once running costs are covered, we intend to make donations to theatre companies that receive no public subscription.

Please feel free to circulate this to any of your contacts who might like to hear this news.
Posted by DC at 16:22 No comments:

One of the outcomes of my August 2017 weekend on the English language was a request to have further days focusing on topics in greater depth. As most enquiries have been made in relation to the following topics, I will now host the following series for 2018. I haven't ruled out the possibility of repeating the general course, or covering other themes, but will wait for interest to be expressed before doing so.

Wednesday, 30 May (during half-term), 9.30--4.00
History of the Language Day
Introduction to the history of the English language; Old English, Middle English, Early Modern English; change in pronunciation, grammar, and vocabulary; change and variation today.

Saturday and Sunday, 28-29 July, 9.30--4.00 with an evening film or performance event
Shakespeare's Language Weekend
Introduction to Shakespeare's use of vocabulary, grammar, metre, orthography; his linguistic creativity; his influence on modern English; the second day will be an introduction to original pronunciation, followed by a workshop in which participants will be trained to use the accent for themselves (and receive a certificate affirming they have taken such a course).

Certificates of attendance will be provided if required.

Because of the limited size and facilities of the venue, places are limited to 50, so early booking is advised. An Early Bird discount is available, up to two months before the event. People should book by mail to the Ucheldre Centre, Millbank, Holyhead LL65 1TE, or directly through boxoffice@ucheldre.org, or by phone 01407 763361. They will be sent a registration form (via email or post, as requested) to be returned to the Centre along with payment.

One- or two-day bespoke courses at mutually convenient times can be programmed upon request (cost: £5K per diem), with the content decided by the group (maximum 25 people). Six months notice is usually required.

All events are held in support of the Ucheldre Centre, a community arts venue in Holyhead, and a registered charity.
Posted by DC at 16:46 5 comments:

One never knows, with a new idea like this, whether it will appeal, or whether the people who have asked for it will actually come, given all the uncertainties in life that have to be managed. The purpose of the Early Bird registration was to establish whether, as they say, we have a 'goer'. That period is now over, and I'm pleased to report that we do.
I'm told by the Ucheldre Centre that enough people took advantage of Early Bird registration to make the event viable. So it's definitely on, and I'm very much looking forward to it. It looks to be a very mixed group, with attendees coming from as far away as Japan, along with several English-language teachers from the UK. The variety of backgrounds will I think add greatly to the occasion, and I'm really looking forward to it.
Details about the event can be found in the previous post. Places can be reserved by contacting the Ucheldre Centre Box Office: boxoffice@ucheldre.org
phone: (+44) 1407 763361 (10 am - 5 pm weekdays, 2 - 5 pm Sundays)

On an English language weekend

I've frequently been asked to put on a summer course for people unable to attend the various lectures I give to schools, literary festivals, and the like, and an opportunity has now arisen to do so. The Ucheldre community arts centre in Holyhead (the name means 'high town' in Welsh) is having a fund-raising campaign, and I've agreed to present a weekend in support. I paste below the flyer that has been produced for the event, which includes contact details.

For anyone interested in the English language and how it works


David Crystal presents a series of his talks on the structure, use, and history of the English language in this two-day event, to be held in the Ucheldre Centre, Holyhead, Anglesey, North Wales. See www.ucheldre.org for the setting.

Language Structure - talks (including Q&A) on the structure of English, pronunciation, punctuation, grammar, spelling, and vocabulary.


Saturday evening is free, with the option of booking for dinner at the Ucheldre Centre and an evening musical concert.

Language Variation and Change - talks (including Q&A) on accents and dialects, the internet and texting, child language acquisition, the future of Englishes, language play and literature, and original pronunciation (with particular reference to Shakespeare).


Reserve a place by contacting

On receipt of your reservation, you will be sent a registration form which will include a place to inform the Centre of any dietary/access requirements and whether you want to take up the dinner/concert options, as well as details of local accommodation, restaurants, and (if you want to bring family members) a list of Anglesey attractions.


Places are limited, so early booking is advised.


Nearest airports are Liverpool or Manchester; direct train service (3-4 hours) from London Euston; by road, at the end of the A55; ferry from Dublin.

On myths and the making of the OED

I've been pulled out of blog semi-retirement by a correspondent who watched the BBC TV show QI last week. It had a sequence on difficult-to-understand negatives, at which point one of the panellists (Gyles Brandreth) made a number of assertions about the size of vocabularies in languages, which my correspondent thought were wrong. She was right.


How many words in English? He said there were 500,000 in the OED. Wrong. There are well over 600,000 in the OED. And of course the OED doesn't claim to include every word in the language; it has, for example, always avoided including the most arcane scientific terms (see further below). The new presenter of QI, Sandi Toksvig, chipped in with 'a million' or more, but the point was drowned out. In fact, the only correct answer to the question is 'we don't know'. Once all the abbreviations, slang, regional dialect, global English lexicon, and specialized scientific vocabulary are added, we are talking about an unknown number of millions.


He then went on to say that English vocabulary is larger than that of other languages, which may well be true, given its global reach and its status as the first language of science, but then asserted that French has only 200,000 words and German half that. Again, absurd notions, based on the naive assumption that the words contained in the largest dictionaries equal the words in the language.


It's sad to see such errors still being trotted out. Still? See my post back in April 2009, 'On the biggest load of rubbish', when somebody claimed to have found the millionth word in English.


But to be more positive: the most wonderful book has just come out. I hate to use the word 'definitive' about any book, but this one justifies it. It is by Peter Gilliver, and it is called The Making of the Oxford English Dictionary. In its 625 pages we get a blow-by-blow, at times even day-by-day account of the way the dictionary was conceived, planned, and implemented, from its origins in the mid-19th-century to the present day. He has trawled through all the correspondence in the Press's archives, and manages to weld everything he found into an engaging story of all those involved - not just the senior editors, but including everyone associated with the project, and not forgetting the secretarial assistants. He has actually written two books in one. Beneath the maintext is a footnote series that at times is a story in itself.


It is fascinating, because what comes to light is a tale of such human and dramatic character that it's amazing the dictionary was ever completed at all. I had no idea, for example, just how much the project was affected by illness, throughout its development. An attack of flu might cause a serious delay in the production schedule - and that was just one of the minor illnesses. Nor was I aware of how many differences of opinion there were between the editors (eg over how many scientific terms to include), between the editors and their academic advisors (including the Philological Society), and between the editors and the managers of the Press (over policy, deadlines, and, of course, money). Money is a recurring theme - from the Press's point of view, a hugely expensive project that needed to pay for itself over time, and, from the editorial point of view, a demanding schedule where salaries were dependent on productivity - a situation that inevitably took its toll on health and family life. Add to this concerns about reputation, both within the University and abroad, and the inevitable personality clashes, and we get a riveting story that Gilliver writes up brilliantly, even to the extent of giving us chapter-ending cliffhangers. I can easily imagine a television drama coming out of it.

Along with John Simpson's equally fascinating memoir, The Word Detective, it has been a great year for the OED. I'm making my own additional contribution next May, following up my book on the historical thesaurus, Words in Time and Place. The new one is to be called The Story of Be - a writing-up of the amazing amount of information on this tiny word to be found in the OED entry. Its sub-title: A verb's-eye view of the English language.
Posted by DC at 10:26 4 comments: