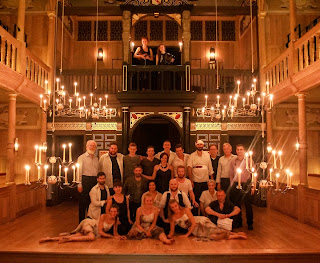 Well, that's been a roller-coaster of an OP ride. Three events, in the Sam Wanamaker Playhouse at Shakespeare's Globe. All three sold out, and hugely appreciative audiences. If you've been to the Globe, you'll know that audience reaction at the end of a play typically takes the form of a huge 'Globe roar' that I'm sure can be heard in St Paul's across the river. We got one too. But it didn't travel so far, because, of couse, we were indoors.

What an amazing space the Playhouse is. A replica, insofar as historical knowledge allows, of the indoor Blackfriars theatre, for which so many of the plays were designed. There were two reasons Ben and I were delighted to be presenting there. From my point of view, you could hear the OP perfectly. When we did Romeo and Troilus in the main house, back in 2005-6, the effect was diminished by the helicopters and general Thameside noise. In the Playhouse, you could hear pins dropping. Every OP feature, therefore, had to be top quality, and - thanks to the ensemble training in Ben's company - it was the best OP I've ever heard.

From Ben's point of view, it was an opportunity to explore the physicality and auditory dynamic of this, as he put it, 'new-old space'. Among the things we learned was the importance of the central corridor, if an actor was to be seen by all (including those in the steep upper-gallery), and the amazing opportunities for interaction provided by the balcony. At ground level, the need to keep moving if actors are not to block the view of those seated at the side stage-left and -right. The ensemble training enabled Ben's company to do this almost instinctively. Shakespeare's company had worked together for so many years that they would have known each other's acting style backwards. Ben's intention was to replicate this dynamic as far as possible, and I think it worked.

This involves the use of cue-scripts. I'd never worked with them before, but they change your whole approach to a play. In a cue-script, the actors receive only their individual lines, plus a cue - the last few words of what the previous speaker has said. This makes you listen to your fellow-actors in a very different way, and introduces an alertness into the acting that is at times electrifying. The Playhouse is a hugely intimate space, with the actors' very close to the audience. The company learned that even the slightest of movements travelled - they compared it to acting for the screen - and of course the OP travelled too. No need for projection here. As Ben said at one point, 'the words and space will do all the work for you'.

This was especially important in the second event of the series, Songs and Sonnets. How do you read the sonnets aloud, so that they can be heard without having to belt them out? In this space, it was easy to generate a quiet, reflective, and moving style. But it took an afternoon of rehearsal for the actors to internalize this. And, at the other extreme, the space also allowed the rousing songs (such as the 'hey nonny nonny' chorus) to come across with a vivacity that almost forces the audience to join in.

The first event was a general introduction to OP. Now that was a delight for me. I've often introduced OP to an audience, but giving the examples myself. Sometimes I've had Ben with me to help. But here was a whole company at our disposal! As a result we could explore the effect of OP in texts that I've never heard it used in before. For example, we dramatized the First Folio prefaces by Ben Jonson and Heminge and Condell (the latter has some lovely humour - 'BUY IT'). And we did the 'four captains' scene from Henry V, where for the first time I heard OP in distinctively Welsh, Irish, and Scottish accents. People sometimes think of OP as if it was a single accent. Early Modern English of course had the same kind of accent diversity as we encounter in Modern English.

The final event in the series, Macbeth, was a huge success - according to the audience, who said so in the talkback session that followed, and also in the Twittersphere, and, already, in a review of the occasion by Eoin Price. This wasn't just because of the OP. Indeed, if people left the theatre saying 'Wasn't the OP interesting?' then we would have failed. No, as ever, the play's the thing. And there were so many fresh ideas in this production. And cheeky moments. The witches were like playful kids, yet full of powers and scared stiff of Hecate. In classic Globe style, they played hide-and-seek before their Hecate scene. The First Witch comes on and mouths 'Where are they?', prompting one member of the audience to shout 'She's behind you!'

Another one. This was a Read Not Dead production, which meant that all actors are obligated to have their scripts in front of them. There were some hilarious moments in rehearsal as a consquence. 'Dead Banquo arrives and asks plaintively, 'If I'm a Ghost do I still carry my script?' And in the final scene, when Macduff approaches the showdown with Macbeth, he begins his speech by saying 'I have no words' - and drops his script on the floor! Much appreciated by Globe aficionados.

But the impact of the production as a whole was as Ben and I wanted it to be. The freshness of the dramaturgy was enhanced by the stimulus of the OP. It made the actors see (or perhaps better, feel) their characters in a new light, and the way in which lines were being freshly heard sparked off interactions and interpretations that I found novel and enticing. Several theatre people who were present have since told me they want to explore OP in their own settings. And Ben's hoping to take the series on tour, though that all comes down to money in the end.

There's a brave new OP world out there awaiting exploration. A dozen Shakespeare plays have been done in OP to date. That leaves another 25 or so still do. Not to mention Jonson, Marlowe, Marston, Middleton...

A correspondent writes to ask about what she calls 'the rise of the unnecessary use of at on the end of questions, as in Where are you at?, and wonders what's going on. Is it simply a tautology?

There's more to it than that. Semantically, where is a very wide-ranging question-word, covering such meanings as general explanation ('Where will it all end?'), broad location ('Where is Denmark?'), specific location ('Where did I leave my glasses?'), intended destination ('Where are you headed?'), and point of origin ('Where have you been?'). Kids (and some adults) like to play with the ambiguity. Where do you live?' On planet Earth.

Particles help to sharpen the focus of the question. 'Where are you going?' means the same as 'Where are you going to?', but the to emphasises the sense of direction. Adverbs like exactly do the same thing: 'Where exactly...?' The motivation for 'Where are you at?' seems to be a a desire to establish more precisely the location of the addressee. We need to look carefully at contexts to see the motivation. Here's a case in point:

X is on the train, travelling to meet Y, and Y wants to check up on whether he'll be there in time. Y calls his mobile. 'Where are you?' X replies 'I'm on the train'. This isn't specific enough for Y, who can't now ask 'Yes but where are you?' as a follow-up question. He has to rephrase, and one of the ways, evidently, is to say 'Yes, but where are you at?' - where exactly have you reached? Or, of course, to start the conversation by asking the question in that way.